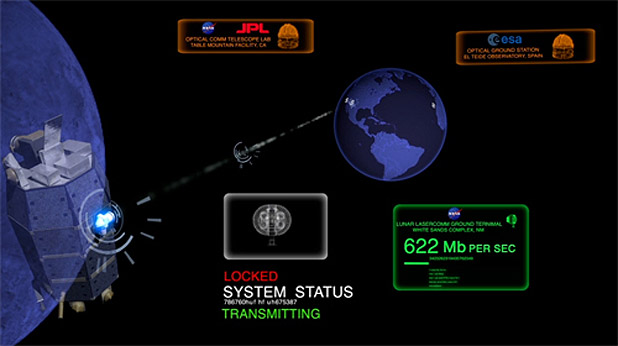 Lasers are indisputably awesome, and NASA just made them a little more so by zapping a record-breaking 622 Mb of data per second between the moon and earth as a part of its Lunar Laser Communications Demonstration (LLCD). Pulsed laser beams were shot from ground control at the White Sands Test Facility in New Mexico to the Lunar Atmosphere and Dust Environment Explorer (LADEE) satellite orbiting the moon, and the results could herald promising new advances in deep space communication. Radio waves have long been the go-to option for sending information between spacecraft and our planet, but the greater data capacity lasers can accommodate may make it possible for future missions to send higher resolution images and 3D video transmissions across two-way channels. To learn more, take a peek at the press release after the break or head over to the official LLCD site at the source link below.