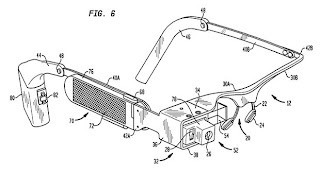 Google originally targeted 2014 for a consumer release when it revealed Project Glass last year, but the time frame has seemingly sped up in recent months, what with developer hackathons in San Francisco and New York and this week’s announcement that people looking to put Glass to creative use could go through an application process to preorder the augmented-reality specs for $1,500.

The company also launched a new site promoting Glass that featured the below video of the new wearable tech in action.The advancement of Google Glass also seems to coincide with recent rumors that the company is planning to open retail stores, presumably where consumers could get more familiar with products like Glass, and comfortable with the idea of wearing the funky rims on their face.

The trickle of Google Glass details (they’re shipping, the API is available and an Android companion app is live) has suddenly turned into a flood tonight, as 9to5Google points out a support page listing the device’s technical specs. While we knew some bits about its capabilities (some of which were explained in a patent application), the official list reveals its display will be equivalent to a 25-inch HD screen viewed from eight feet away, while it’s camera does 5MP stills and 720p video. It packs 16GB of storage onboard, 12GB of which are available to the wearer. Audio is transferred via a bone conduction transducer, while its wireless capabilities include Bluetooth and WiFi 802.11 b/g. There’s a micro-USB charger included with it and the battery is expected to last a “full day of typical use” although video and Google Hangouts will drain it more quickly. Also published is an FAQ for things like “Is it ok to go scuba diving with Glass?” (A: No, jackhammering is also probably out, while laws concerning mobile devices and driving may rule out use behind the wheel as well), covering things any Explorers should know before their headset arrives.

High resolution display is the equivalent of a 25 inch high definition screen from eight feet away.

While there are thousands of Micro USB chargers out there, Glass is designed and tested with the included charger in mind. Use it and preserve long and prosperous Glass use.

No. Glass is robust, stable and built to ﬁt into your life. But you might break it if you don’t handle it with care. Protect your Glass by using the pouch we’ve provided, or another carrying case that you trust to keep Glass safe, dry, and awesome.

Like everything, there is a time and a place.It might be harder to hear Glass or use voice input commands in noisy areas, and it might be harder to see the Glass screen in bright sunlight. Also, you may be in certain places like a doctor’s oﬃce where those around you don’t feel comfortable being photographed or captured on video. Always consider your surroundings – just like you would with a cell phone. Above all, be considerate.

It depends on where you are and how you use it. As you probably know, most states have passed laws limiting the use of mobile devices while driving any motor vehicle, and most states post those rules on their department of motor vehicles websites. Read up and follow the law! Above all, even when you’re following the law, don’t hurt yourself or others by failing to pay attention to the road. The same goes for bicycling: whether or not any laws limit your use of Glass, always be careful.

Glass isn’t for everyone.Like when wearing glasses, some people may feel eye strain or get a headache. If you’ve had Lasik surgery, ask your doctor about risks of eye impact damage before using Glass. Don’t let children under 13 use Glass as it could harm developing vision. Also, kids might break Glass or hurt themselves, and Google’s terms of service don’t permit those under 13 to register a Google account. If Glass is not for you and you wish to return it, do so before the end of the applicable refund period.

Use caution. Glass can’t protect your eyes from ﬂying debris, balls, sharp objects, or chemical explosions. Using Glass while operating heavy or inherently dangerous equipment, or engaging in physical sports, could distract you, cause Glass to impact your eye, and lead you to harm yourself or others. So play your one-on-one Glass free.

Uhhh… no. Don’t let the Glass device or battery come in contact with liquids. Liquids can get into the electronic components, leading to corrosion.