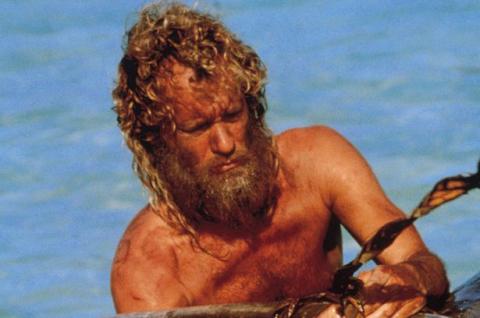 When I saw this Picture with News it reminds me Tom Hanks from Cast Away hollywood movie, now come to the News.

Jose Ivan was shipwrecked late in 2012 off the coast of Mexico, but incredibly the man somehow managed to survive a trip of more than 16 months and 8,300 miles by eating turtles and drinking fish blood.

Ivan was found by a Norwegian researcher, who said the sailor spoke Spanish and had a long beard. The man, who said his name was Jose Ivan, had set out with a travel companion back in 2012 in a 24-foot fiberglass boat, leaving Mexico and headed toward El Salvador. The companion apparently died several months ago.

“His condition isn’t good, but he’s getting better,” said Ola Fjeldstad, a Norwegian anthropology student who found the man on Ebon, an atoll of 22 small islands that make up part of the Marshall Islands.

“The boat is really scratched up and looks like it has been in the water for a long time,” added the researcher. “He has a long beard and hair.”

Jose Ivan had an incredible tale of survival at sea, something reminiscent of Ang Lee’s The Life Of Pi. The shipwrecked man said he was able to stay alive by eating turtles that he caught with his hands. When there wasn’t enough rain to drink, he would resort to drinking the blood of fish and birds he caught.

Ivan was able to do this without any kind of fishing equipment.

The shipwrecked man is not the first one to survive for several months in the Pacific Ocean. In 2006, three Mexicans were lost on a shark-fishing trip and drifted in the middle of the ocean for nine months before being discovered alive. In 1992, two fishermen from Kiribati lived for close to six months at sea.

Another shipwrecked man survived three days underwater last year, breathing in a pocket of air created when his ship sank in a lake in Nigeria.

Ivan is now being cared for by some locals.

“He’s staying at the local council house and a family is feeding him,” said Fjeldstad.

Shipwrecked man Jose Ivan will have to wait a little longer before he can return home, however. The lone airplane owned by the Ebon government is grounded for maintenance and won’t be able to return until early next week. Officials are considering sending a boat to pick him up.