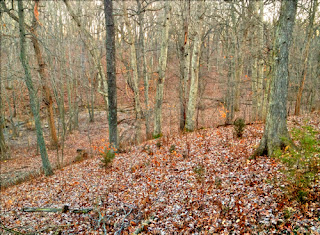 I know that I am not the only one who has heard them, because I’ve talked to other people who have also heard them. In fact, I think that the phenomenon has even been documented somewhere; it is considered to be an auditory hallucination or some such thing.

All I know is that if you go into the deep woods, far from the sounds of the rest of the world…you don’t even have to be alone…just quiet…you will hear voices, as if there might be a group of people nearby.

It could be at night, when you are quietly contemplating the campfire. Or it could be at high noon, as you walk amidst the trees, lost in the prisms of their leaves in the sunbeams. Suddenly, there’s a murmur out there…maybe a response…maybe a giggle or a chuckle…fifty yards away, maybe closer.

If you move towards the voices, they will go quiet; and then, you’ll hear them again, coming from a different direction. People do try to find them – the first timers, the newcomers, the uninformed. Fortunately, no one ever tries for very long.

“The world around us is a mystery…and men are no better than anything else. If a little plant is generous with us, we must thank her, or perhaps she will not let us go.
“To believe that the world is only as you think it is is stupid. The world is a mysterious place. Especially in the twilight.
“This can follow us; it can make us tired, or it might even kill us.
“At this time of the day, in the twilight, there is no wind. At this time, there is only power.” From the book Journey to Ixtlan, C. Castaneda

There are some who would appear to be very familiar with the voices. These people spend and devote their lives to knowing the voices, trying to understand if and what they might want, learning to appease them, doing what they can to prevent conflicts between the voices in the woods and the people who come to visit.

There are legends, far and wide, of people who strode boldly into the aboriginal jungle or the primeval forest, determined to pursue the mysterious conversations with unrelenting purpose, to finally cornering the source – which was once suspected to be reclusive indigents.

Would you like to know who makes the voices in the woods? Would you like to meet them? There are rules you must remember; they are translated from the communiqué that was issued by the little people some five centuries after their discovery. It was determined, after a great deal of scrutiny by authoritative minds, that these ‘rules’ could well apply to anything that might be found in the wilderness.

The first rule is that we are not to try flushing them out. There was a mention of ‘danger’, but it wasn’t made clear as to who might be in danger. These denizens of the deep woods simply do not like to be disturbed.

The second rule is that once you have seen them (assuming you’ve seen something), you are not to look away. You have to make sure you continue to watch the one you think you see. If you glance from one to another, you will probably lose sight of them altogether, and then, you will not see them again.

The third rule is that no matter what you see them do and no matter how long it takes, you are not to go to them. And, if you see them suddenly run away, you won’t want to chase them.

In the fourth rule, they ask us not to keep them waiting. This is a complicated rule. From what we understand, they expect us to be ready to do anything and to have anything on hand that they might want. But we do not yet know who or what they are!

Rule number five, in a round about sort of way, tells us that if we are nice to them, they might be nice to us. They don’t want to see anything that might suggest a weapon or a threat. This would mean that we are either to go into the deep woods without a weapon for defense, or we have to leave it at some distance from our place of encounter.

Among the speculators, there has always been much elaboration about the final point on that communiqué, the sixth rule. The wordsmiths have pointed out the play in words, which might be one of several clues. This is what it says: Remember what might happen.

To remember something presumes it is of the past. But ‘what might happen’ implies the future and also suggests an uncertainty. Some people read the words as a cautionary advice, and some people see them as a threat; and no consensus has ever been reached.

The way to see who makes the voices in the woods is to go in…deep…find a comfortable spot and prepare to be there for an unknown duration…and then, wait for them to come to you. We do not know what they are or what they might do.