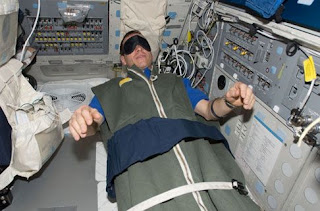 After a long day’s work, you’re ready for a good night’s sleep. But it’s a little different if you’re weightless.

There’s no gravity in space, so astronauts can sleep almost anywhere. But this weightlessness means there is a risk of drifting around and bumping into things in your sleep. To solve this problem, astronauts use sleeping bags that can be attach to almost anything. If they’re in a space shuttle, many astronauts attach the sleeping bags to the wall so that they can feel pressure on their back or their head, making it seem more like a normal sleeping environment.

On the international Space Station, things are slightly more luxurious — the astronauts have their own ‘box’ (quarters) that they can sleep in. The sleep stations are located in a couple of different modules on the International Space Station, says Dr Laura Barger from Harvard Medical School’s Division of Sleep Medicine in the US. She says that the Russian sleep stations are in one module, while the US has some stations in another.

However, there are a number of factors that might stop them dozing off. “We studied sleep aboard Space Shuttle and International Space Station Missions and found there is a vast amount of sleep deficiency among astronauts and a widespread use of sleep promoting medications during spaceflight,” Barger says.

These can be as simple as being uncomfortable sleeping in a free-fall environment without the pressure you’d expect against your back. The temperature can also play a role in this discomfort — some astronauts, like the famous Apollo crew, say that they’re too cold, while others complain about the heat. It can also be very noisy, depending on what’s happening at the time and sharing close quarters can disturb people if their colleagues are up and about.

There is also the 90 minute light-dark cycle for every time they orbit the Earth, which, according to Barger, can affect the astronaut’s circadian clocks as the light brightens and dims frequently. “We think that there’s an opportunity for the clock to become misaligned with the 24-hour cycle that they’re trying to keep.”

There is a new lighting spectrum being planned to help astronauts deal with this alignment. “Shorter wavelengths of light have been shown in laboratory studies more effectively shift the circadian clock,” Barger explains. ”This lighting could potentially be used in flight to facilitate circadian alignment when the astronauts’ sleep/wake schedules are abruptly shifted.”

And just in case you’re wondering, it is also possible to snore in space.

One thought on “How do astronauts sleep in space?”