It was happened 6 or 8 months ago when I was working at Qatar. I don’t remember date exactly. not disclosing my friends name due to privacy concern.

My Colleague came to our department around 04:30 PM and said to us that one of her friend is trapped. Company locked her friend inside in a room. I asked whether she contacted to her friend’s Company. She said Yes but there were saying they don’t know anything about this victim. Then I told her to report Qatar Police. Because I believed Qatar Police is far better than our country police. I don’t remember what she said. I asked her how she came to know about this. My Colleague said she was chatted via WhatsApp (it was in her hand when locked up).

With her permission I got Victim whatsapp number and told to send the map. She did. that place name is Rayyan,Qatar. It was 05:00 PM. everyone left from office. I told her to call the police she said police unable to find the location as there are many buildings. I asked her to call embassy but she don’t have enough balance. I purchased a 20 QR recharge card and sent to her.

Her company is an employee supply and she was working in another office as tea girl. She came few months back to Qatar and due to some payment issue she told the company to send her back to Philippines. But company refused and locked her in room.

I called 999 Emergency numbers to report this issue. Because this is same as kidnapping. They said to go and report in police station. I went to room , told story to flat mate and requested him come to Police station to report this. He refused and said don’t get in trouble better leave this issue. I wasn’t able to leave the issue because anyone can face this. What if others wont help us. Then I told him at least tell which is nearest police station. Based on his information around 07:30 PM I went to Capital Police Station Qatar . it was 15 minutes walk-able distance from room but I didn’t know that time. So I took taxi.

I went to ‘Capital Police Station’ , two Police were sitting in reception. When I was trying to explain one guy asked “Fih Arabic?” means Do I know Arabic. I said NO. he said wait until someone know English in Arabic. I waited there. Polices are coming and going out. I waited around 45 minutes and no response from these cops. This time one Arab guy was talking in that reception. After he disconnected the call, I approached him and asked to translate English to them. He explained whole story to those receptionist and I showed the whatsapp map too.

The police guy (reception) said I have to go with to Rayyan Police station to report this with my colleague as I don’t know the victim directly, because it’s come under their Jurisdiction . that is the first time I came to know a Small Country Qatar also have Jurisdiction.

It was around 09:00 PM. I called my Colleague and told her If she able to come to Rayyan police station to report this. She said she cannot come that time. I don’t know why she was not willing to help her own nationality and friend. Cant criticize her everyone have their own justification. 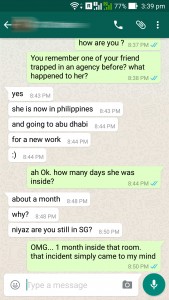 This incident flashed in my mind yesterday (07-Feb-2016) & I had a Whatsapp chat with my colleague to know what happened next. She said she was inside room around 1 month. God Damn. I am sure whatever company did was illegal.

Guys I just wanna let you know that Everyone will get in trouble any time. Please help them. Stop saying excuses. Because tomorrow You might be in their position & imagine what if no one would be there to help. Why we are afraid to help someone when our side is right. We Live in this world only for few years. Do good, Don’t afraid on anything. God always stands with the people who do good.

I also have one question to Qatar Police, If you cant help in these important situation what cases you guys help the public. there are different ways to help this girls like contacting her company. I heard some good stories about middle east country police. But based on my experience All the Polices in the world are same. Ofcource there will be some good among them. 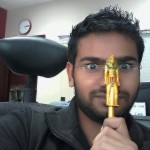