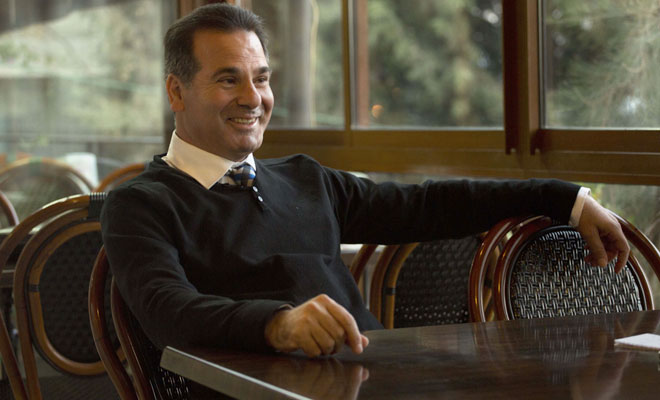 While living in the US in the 1980s, Israeli restaurant owner Jawdat Ibrahim had won $23 million in an Illinois state lottery.

A restaurant owner in an Arab village outside of Jerusalem says he is on a mission to save culinary culture by making diners a simple offer: Turn off your cellphone and get a 50 per cent discount.

Jawdat Ibrahim says smartphones have destroyed the modern dining experience. He hopes the generous discount will bring back a more innocent time when going to a restaurant was about companionship, conversation and appreciating the food, rather than surfing, texting or talking to the office.

“I’m changing something. It might be something small, but maybe in some small way I’ll be changing the culture of eating,” said Ibrahim, 49.

Ibrahim is the owner of Abu Ghosh, a well-known restaurant named after its hometown, located about 10 kilometres outside of Jerusalem.

The town is known as a symbol of coexistence, and its restaurants, serving up platters of creamy hummus and grilled meat, are popular with Arab and Jewish visitors alike.

Ibrahim, who opened the restaurant in 1993 with winnings from an Illinois lottery, said mealtime conversations have long been a staple in this cellphone-obsessed country. But the situation has worsened in recent years as smartphones have become more sophisticated.

He said he became dismayed as he saw groups of friends or married couples sitting in silence, staring at their screens and ultimately asking him to reheat their food.

“Technology is very good. But just when you eat, just especially when you are with your family and your friends, you can just wait for half an hour and enjoy the food and enjoy the company,” he said. “A lot of people, they sit down and they don’t enjoy their food, their company.”

Ibrahim is in a better position than most to offer steep discounts. While living in the US in the 1980s, he won some USD 23 million in an Illinois state lottery.