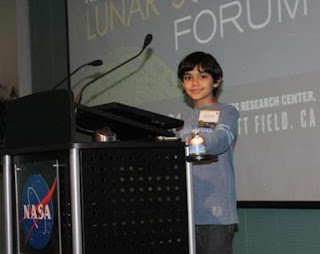 Tanishq is an Indian American child genius and is at the middle school level though he and his sister have been home-schooled. Their parents teach them and once a month the charter school officials come and check the status.The children do not want to go to school with other children. They tried it earlier, but found that neither other students nor teachers were kind to them.Tanishq has already completed one third of the credits needed for a college degree at the American River College in Sacramento, California. The college allows him only to be a part-time student, though he desperately wants to be a full-time student.Home-schooling has not affected their social skills, Taji said, adding that she spends all her time with the children.Tanishq wants to be many things, though the preference is for being a scientist, discovering something big.Both children know Hindi and watch Hindi movies frequently. To their surprise, Tanishq knows his mother tongue, Malayalam, though they have not taught him nor use it frequently at home.In the last two years since Tanishq started to attend college, he finished two subjects each semester. More subjects are not allowed. He has already completed astronomy, geology, and biotechnology. He sits with students twice his age and earns straight ‘A’s in all subjects. He topped the class in astronomy and geology. Of the 60 units needed for an associate degree, he has completed 24 so far.Tanishq’s younger sister Tiara is also a child prodigy who got into Mensa at the same age as he did. At times, Tiara tests Tanishq’s knowledge in various subjects, the parents said.

The parents saw their children’s special skills when they were about two-and-a-half years old. At age 4.5, Tanishq was tested, and he scored in the 99.9 percentile on the standardised intelligence test and was inducted into Mensa — an organisation for people with an IQ of 148 and above, or in the top two per cent of the population.

Tanishq Abraham, 9,and Tiara Abraham,7,with parents Dr Taji Abraham and Bijou Abraham. Father Bijou Abraham, is a software engineer, and mother Dr. Taji Abraham, is a doctor of veterinary medicine.
Tanishq (2003) & Tiara (2005) are the youngest South Asians to join Mensa and among the youngest Americans in Mensa.To be members of Mensa, one has to score 98 percentile in a standardized IQ test. Tanishq scored 99.9 percentile and Tiara scored 99 percentile in the standardized IQ test.They became the youngest siblings to join the high IQ society Mensa.

Tanishq’s other passions include music where he has been involved with formal training in piano since 3 years old, a chorister with the San Francisco Boys Chorus, chess, swimming, dancing and soccer.Tiara is involved in extra-curricular activities such as gymnastics, dancing, soccer and art classes.

Both children at a young age have taken up volunteering and raising funds for charity. They have actively participated for UNICEF’s Trick-or-Treat. Tanishq has taken part in Science, Spelling and Vocabulary Bees that help raise scholarship money for the need-based gifted students in India.

Let’s congratulate Tanishq for making India proud with his super intelligence. He took entire America by surprise.At 7, he gave lectures to students who were twice of his age.The youngest student to be accepted at American River College in Sacramento, California at the age of 8.Today, he is only 9 and already completed one third of the credits needed for a college degree at the American River College in Sacramento, California.