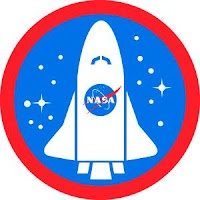 Muslims believe that the Quran is a book of science, and that the Prophet Muhammad also revealed a number of scientific points. It is for this reason they are always quick to jump on the bandwagon for any scientific fact or claim that the West introduces. Unfortunately this eagerness can also lead to their ridicule, as they are also quick to provide help to spread the message for a number of false claims and outright lies, which they wrongly believe support the claim of Islam being the true religion.

In regards to the splitting of the moon, it is mentioned briefly in the Quran, along with more detailed stories being found in the hadiths.”The Hour (of Judgment) is nigh, and the moon is cleft asunder. But if they see a Sign, they turn away, and say, “This is (but) transient magic.” (Quran 54:1-2). The hadiths explain that the splitting of the moon was one of a number of miracles performed by God during the time of Muhammad, and its purpose was to help convince people that he was a prophet.
While the narrations for the moon splitting are considered authentic by almost all modern scholars, what they don’t always agree on is the nature of the miracle. Some interpret the hadiths to refer to a physical split, while others claim it was only an optical illusion. In either case, the moon was seen to have been split by the public of that time.

Gathering evidence to prove that the moon has been split is extremely difficult. Just as Allah had the power to split the moon in half, he would also have the power to put it back together and remove all evidence of a split. In the case of an optical illusion, there would of course be no evidence at all.
There is no evidence to date to prove the moon split, and none has ever been released by NASA or any other organisation. This is one of the versions of the story being forwarded around, along with an accompanying photograph:

In one of Dr. Zaghlool Al-Najaar’s seminars, in one of the British universities said: “The miracle of the splitting of the moon has been proven recently”… “One of the british brothers who is very concerned about the state of Islam “Dawood Musa” who is the new chairman of the British Muslims party said “While he was searching for a religion, a friend gave him a copy of the Quran translated in english. he opened it & came across surat Al-Qamar & read “The hour has come & the moon has split”, looking at this he said ‘The moon has split?! he then stopped reading & did not open it again.

Then one day while watching a program on the BBC, the broadcaster was talking with 3 American scientists, & the broadcaster was blaming America for spending billions of dollars on space projects, in a time where millions of people are suffering from poverty.The scientists were trying to explain why it is important to go into space exploration. Soon the scientists came to discuss the most expensive trip tp the moon, which costed about $100 billion, so the broadcaster asked them “So to put the American flag on the moon you spent this much money?!”

The scientists stated that this much money was spent because they were trying to study the internal structure of the moon to see what similarities it has with the Earth, & they said that they were surprised to find a ‘Belt of Rocks’ that goes from the surface of the moon right to the inner depths.
Being quite surprised, they gave this information to their geologists, who were also surprised, as they concluded that this couldn’t be unless the moon was once split & resealed. The rocks on the belt are a result of the impact during the time that 2 halves of the moon recombined.

Watching this brother Dawood Mussa jumped off his seat screaming “This is Muhammad’s miracle which occurred more than 1400 years ago, & now the Americans are spending billions of dollars to prove it to the Muslims. He then said “This must surely be a true religion, & so, where once Surat Al-Qamar was a cause for him disbelieving in Islam, it was now the reason for him embracing Islam. 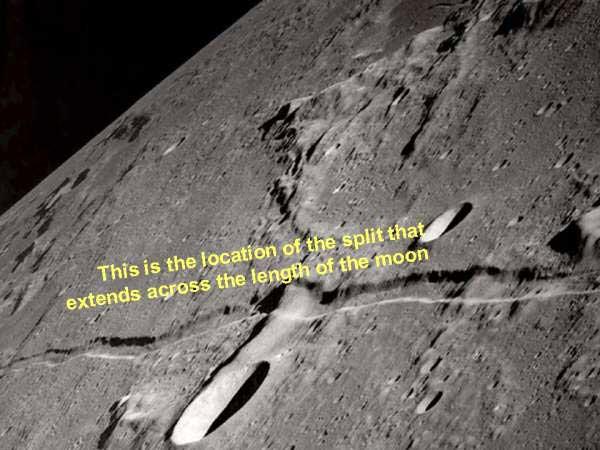 NASA have responded to the hoax, and verified that it is false. They have stated that the photo was taken from the Apollo 10 mission to the moon, and that someone has added the quotation later. NASA confirmed the photo is of Rima Ariadaeus, which is a linear rille on the moon, and was first noticed through telescopes over 200 years ago. The rille is said to be several hundred kilometres long, and when compared to NASA’s moon circumference measurement of 10,864 kilometres, it falls well short of stretching the whole distance. Other photographs taken from a further distance confirm its relatively short length.

The coming 2012 end times hysteria has led to the rise of the second hoax regaining popularity, as a new twist has emerging with apparent video footage of NASA saying the world will end near the end of the year. Fraudsters have decided to combine that with the old story of the NASA confirmation that the sun will rise from the west, which is said in Islam to denote the end times of the world.
Adding weight to the claim by NASA is that this story has actually been published in newspapers under the title of “NASA confirms possibility of sun rising from the West”. Unfortunately this is probably just a case of the newspapers editor also being stupid enough to fall for it, but there may have been other reasons for its publication – such as to ridicule the writer, or to create disunity amongst Muslims. A copy of the publications and their transcriptions are below:

The science of astronomy states that the speed of planet Mars has been decreasing in its course toward the eastern direction in the past few weeks to the level we notice the “waver” between the east and the west and on Wednesday the 30th of July the planet movement stopped going toward the eastern direction.
Then in the months of August and September…Mars changed its course in the opposite direction to the West- and that until the end of September which means the sun will rise now from the west on Mars!! And this weird phenomena of the opposite movement is called “Retrograde Motion” Most scientist state that all the planets will go through the same once at least and our planet Earth is one of them. Planet Earth will move in the opposite direction some day and the sun will rise from the west!!

This might occur soon and we are unaware! The rise of the sun from the west is mentioned in the hadith and this is the major sign of the day of judgement, most if not all, the minor signs have occurred. Wake up. Our beloved messenger Mohamed (Peace Be Upon Him) said: “One of the signs of the hour the sun will rise from the west, where no longer tauba (forgiveness) will be granted”!!

And the strange thing most of our Shariah scholars mentioned that the rise of the sun from the west occurs only once on that day the sun will rise from the west then again from the east and continues until Allah wishes and this is similar to what is happening to Mars it stops, then it changes its course of direction for a short period of time then returns to way once it was.

And Abdullah Bin Amro (R.A.) said: (I memorised from the messenger (SAW) a hadith I will never forget I heard the messenger of Allah (SAW) say: The first aya to come the rise of the sun from the west) [Ahmad]. And the messenger SAW “Allah places HIS hand at night to forgive his morning sinners, and places in the morning to forgive his night sinners until the sun rises from the west” [Muslim].
This piece of news is very important as it brings with it a great sign of warning and remembrance of the coming of a new WORLD – the world of he Hereafter When we show this hadith that was told 1400 years ago about this miracle..you will see InshaALLAH, a lot will revert to right path…And the Muslims if they see this phenomena happening in Mars who knows maybe it would bring them closer to our CREATOR. May Allah keep all of us in the right path and provide us with success in this world as well as in the hereafter. 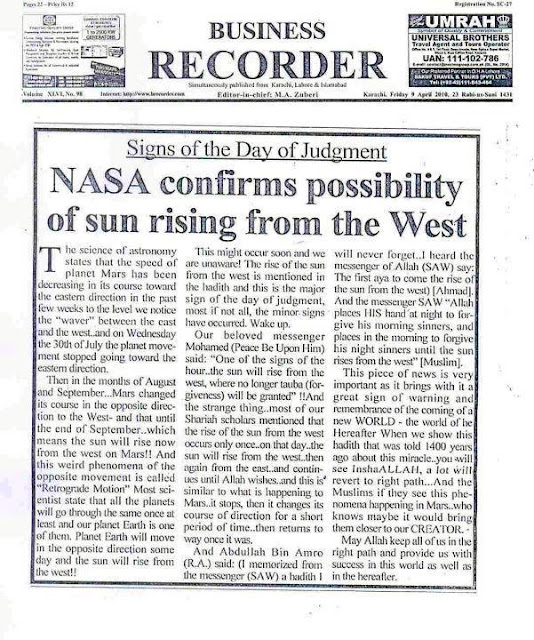 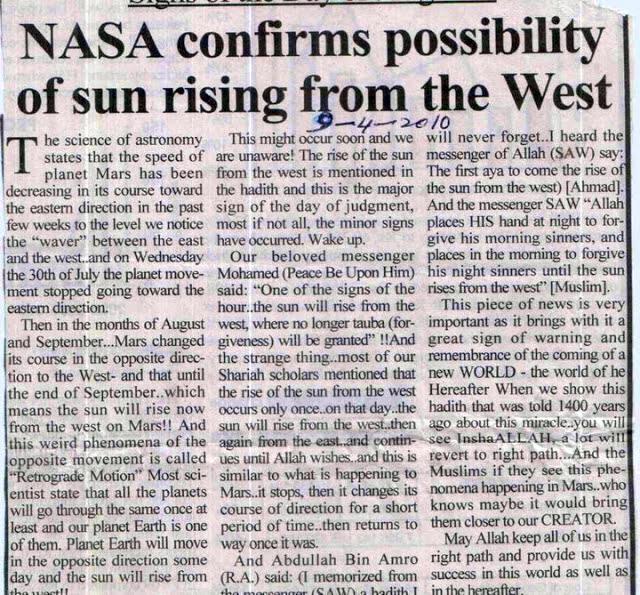 The poor English and unjournalistic style are just a couple of dead giveaways that the story is not authentic, and it has been suggested the newspaper has simply published some crazed bloggers rant. The Business Recorder is a Pakistani newspaper, and it has also been published in Indian Newspapers, and potentially other countries as well.

NASA has also decided to officially refute making this claim, and one might ask if both of these NASA stories are true, why don’t people send the links to the stories on the official NASA website, instead of creating stories, images, and Youtube videos. Quite simply, this information is not on the NASA website, and has never been stated by them.

Muslims should always takes steps to verify the authenticity of stories they hear. There is nothing worse than someone who comes across information, refuses to check whether its true, and hits the repost or forward buttons on the computer. In fact this same advice has also been given by NASA, who have in their responses to these two stories, as well as countless others such as NASA confirms the end of the world is coming, NASA confirms we are under an alien attack, NASA confirms the discovery of UFOs, have stated “Do not believe everything you see on the internet”. Quite frankly, if you have fallen for these stories, then the only confirmation that has been made is the fact that you are an idiot.